You are here: Home / Girl's Getaway / Cowgirl in Training

While I’ve never been a fan of country music or the whole lifestyle that surrounds it, a recent visit to Cheyenne, Wyo., changed all of that. Maybe it’s the excitement that surrounded Cheyenne Frontier Days, or maybe it’s the way I felt while horseback riding in the rain, but, either way, I’m also finding myself singing along to country tunes that my boyfriend constantly has playing on the radio. I think it’s safe to say, at this point, that my cowgirl training in Cheyenne has made me a bona fide lover of all things country.

The trip started off with an arrival at Little America Hotel & Resort Cheyenne,  which, despite its name, was big on luxury, quality and service. My room was nicely outfitted with a sitting room and a desk (so I was able to get some work done in between outings), an extremely comfortable bed and a roomy bathroom with separate vanity area. The room service, which I ordered several times during my stay, couldn’t be beat. And the heated outdoor swimming pool, surrounded by a multitude of adorable bunnies, was located just outside my door.

Once my group of fellow travelers was all settled in, we met up with Jill Pope from Visit Cheyenne – The Convention & Visitors Bureau at the Cheyenne Depot Plaza. From here, we hopped on a horse-drawn carriage ride to the historic Nagle Warren Mansion for a reception of wine and snacks.

This charming bed and breakfast stands as one of the few remaining stately homes on Cattle Baron’s Row that was built during the 1880s—when Cheyenne was the richest city (per capita) in the world. It features 12 guest rooms, and each is uniquely decorated to recreate the elegance of the Victorian West.

Here, you’ll find ornate staircases, carved leather ceilings, original stained glass and crystal windows, authentic period wallpaper and beautiful antique furniture. The mansion also features a parlor, a dining room (where breakfast is served daily), a library, a full workout facility and a hot tub gazebo. Even more impressive though, is the hospitality that owners Jim Osterfoss and Jane Branigan (who purchased the property in 1997) offer to their guests. “I wanted to create an excellent guest experience, and you can’t do that with a 300-room hotel,” Jim says. He takes this responsibility seriously, offering every room amenity imaginable—from back scratchers to clothing steamers and boot jacks.

Next on our list was a tour of The Historic Plains Hotel. Opened in 1911, and remodeled in 2002, the hotel offers 130 guest rooms and suites—each outfitted with custom-designed furniture and bed coverings. Just inside the gorgeous lobby (where you’ll see a stunning stained-glass skylight depicting the planets of our solar system), you’ll also find the newly reopened Wigwam Lounge. This jumping joint was filled with cowboys in their finest Cheyenne Frontier Days committee attire—all of whom were anxious to “brand” pretty ladies with CFD stickers. It was in the hotel’s restaurant where my group sat down for dinner, and I was happy to enjoy the evening’s special of mussels, tilapia, shrimp and salmon. Had I seen the bacon-wrapped meatloaf mountain prior to ordering, however, I would have jumped at the chance to see the waiter hand deliver it to me.

Once we were nice and stuffed, we headed over to The Wrangler to get our hands on our own custom steam-fitted hats. This hard-to-miss outpost for all things Western-wear related stands tall adjacent to the Cheyenne Depot Plaza. I ended up choosing a black and white number by the American Hat Company, and, as the days went by, I grew quite fond of my new look. And, as it turned out, my entire group must have loved this place, because we all ended up going back every day during the trip. On one of these subsequent visits, I couldn’t help but buy a pair of boots to complete my ensemble.

The next day, we started off bright and early (after an aforementioned room-service breakfast) and headed off to Vedauwoo Campground and Recreation Area. This area of rocky outcrops, located between Cheyenne and Laramie within Medicine Bow – Routt National Forest, is known for its hoodoos (tall, thin spires of rock that resemble totem poles) and is popular with climbers. While we didn’t pull out our ropes and carabiners, we did enjoy an idyllic hike along Turtle Rock Trail.

Next up was a visit to Terry Bison Ranch, where we started out perusing the General Store (and got a photo or two atop the stuffed jackalope, which I will spare you of here). This working guest ranch offers everything from a cowboy steak fry and horseback rides to private fishing and a saloon. We opted instead for a train ride within the 27,500-acre ranch to hand feed a herd of bison. While it was a bit of a slobbery mess, it was a unique experience nonetheless. Afterwards, we sat down for lunch at the ranch’s Senator’s Restaurant—where I tried Rocky Mountain oysters for the first time. They were a far cry from the oysters I’m used to eating in New Orleans, but they came with horseradish and cocktail sauce all the same. I followed that up with a delicious bison burger (that did not come from the herd we just fed).

After a rest stop back at Little America, we headed out once again. This time, it was to enjoy a few (well-deserved) frosty beverages at Freedoms Edge Brewing Co. Located in the heart of Cheyenne, this local hangout was hoppin’ with guests—all of whom were enjoying the cool breezes and flowing beverages. There was even a “food truck” parked outside (although it was more of a mobile pizza oven), serving up fresh-baked pizzas. I decided to save room for dinner and simply kicked back with a few 1890 IPAs.

The last stop of the night was dinner at Morris House Bistro. My group and I had an entire room to ourselves (in what was once the home of Esther Hobart Morris, the nation’s first female Justice of the Peace), where we satiated our bellies with a number of dishes and libations. We started off with the Pawley’s Island cheese plate; the grilled halloumi was so much like chicken, that I wouldn’t be able to tell the difference in a blind taste test. For the main course, we decided to share plates of John’s Island duck breast, MHB’s hand-cut ribeye, sandlapper scallop skewer and Georgia peach pork loin. (There were also several dishes with Louisiana flair, and, not surprisingly, owner Dameione Cameron hails from Louisiana.) All of this was paired with wine and black bourbon fizz cocktails. And while I’ve never been a fan of brown liquor, this concoction made me a convert.

The following day, we started off with a trolley tour of Cheyenne. Our tour guide, Val, knew everything there was to know about the area and the landmarks (or so it seemed). She explained the history of murder and mayhem that took place during the time of Tom Horn in the early 1900s. Come to find out, Cheyenne was the epitome of the Wild West back in its early days. Some of that spirit lives on today (see above about the Wigwam Lounge).

For lunch, we decided to try out Rib & Chop House. Lo and behold, this menu also featured Louisiana-inspired dishes (the owners are from Baton Rouge). I decided to forego the Louisiana pasta jambalaya, and opted instead for the BLT on local sourdough bread with a side of carrot soufflé. I kid you not—I could eat this combo every day for a week.

After our meal, we headed off for the Bit-O-Wyo Ranch. This authentic and privately owned ranch is where we decided to try out our horseback riding skills. As our wranglers explained the quirks of each horse, I was crossing my fingers that I’d get Bridger—what seemed to be a reasonable horse who could handle my beginner ways. Sure enough, I lucked out with him as my horse. At first, all seemed well. As we meandered along our trail, and the rain began to drop, Bridger decided to take off in a full-on trot that had me bouncing out of my saddle and holding on for dear life. It was quite a ride, but one I wouldn’t trade for anything.

Next up was a visit to the nearby Bunkhouse Bar & Grill (a full-on Western bar, complete with a horse parked outside). We sipped on a few cold beers before heading back to Bit-O-Wyo for the horse-barn dinner show. We made it just in time before a torrent of rain and hail started pelting the metal roof of the barn. The cowboys who were busy cooking up more than 100 steaks (plus accompanying baked potatoes, cowboy beans and homemade applesauce) didn’t let the weather deter them from their task. As if the meal wasn’t enough, we were also treated to true Western entertainment of music and comedy. It was a scene straight out of Howdy Doody, and it was a blast.

For our last day of the trip, we started with the Cheyenne Frontier Days parade. While it was quite tame compared to the parades of Mardi Gras, this family-friendly event was interesting all the same. We cheered the military marching bands, waved at the rodeo queens, and whooped and hollered for the antique wagons and cars that passed us by.

Finally, it was time for us to head over to Frontier Park for what was, in fact, my first rodeo. And let me tell you, I had a hell of a time. We joined in on the Behind the Chutes Tour, where we were able to survey the horses, steers and bulls prior to the action. Handsome as the animals were, the cowboys were far more fetching. Once our boots were dusty, we headed over to the Indian Village to scope out traditional dancing and to try a plate of Indian tacos (fry bread topped with ground beef, beans, lettuce, tomatoes, black olives, cheese, salsa and jalepeños). Once again, I could eat these babies every day.

Next up was the actual rodeo, where we watched the spectacle that was bull riding, steer wrestling, saddle bronc riding, team roping and the like. I swear, some of these guys were named specifically for participating in the rodeo. Take Howdy Cloud, for example, who placed first in the section one bull-riding event. Before it was all said and done, I was up on my feet cheering the cowboys as they roped and rode their way to the finals in Las Vegas. And, before we left, we made sure to stop by Trader Barb’s to check out her gorgeous selection of turquoise jewelry.

With the little bit of energy we had left, we departed for Little America for a barbecue patio dinner. Barbecue chicken, corn on the cob, baked beans, coleslaw and cherry cobbler all found their way onto my plate. We followed that up with a few drinks in the hotel lounge. But that wasn’t enough for this rowdy group of girls. We decided to bid farewell to Cheyenne with a final-night visit to the Outlaw Saloon. Boasting bands on two stages, a mechanical bull, a team-roping area, a semi-truck trailer that transforms into a bar and free whiskey shots (from Wyoming Whiskey), you could say that we kicked up our heels at this boisterous bar. In fact, one guy on the dance floor literally kicked a heel off of his boot.

Overall, this was a trip that I’ll never forget. I’ve spent time in Jackson in the past, and I mistakenly overlooked the gem of a city that Cheyenne is. This town of nearly 60,000 people could easily jump to 60,001 in the near future. Next year, look for me in the crowds. I’ll be the one wearing a cowgirl hat and boots, and a big smile on my face. 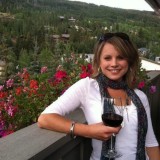